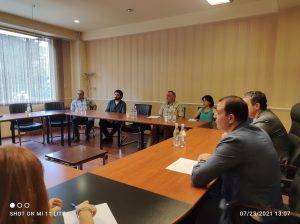 On July 23, the Academic Council of the Centre for European Studies gathered to discuss two points on agenda: resignation of Dr Artur Ghazinyan from his position of the Director of the Centre and nomination of a new candidate for the Director’s position. 14 out of 16 members of the council under guidance of prof. Ashot Alexanyan who was elected as the main speaker and presenter, listened to Dr Ghazinyan, Prof. Alexanyan, Prof. Apresyan.

On June 20, 2021 Dr Ghazinyan participated in 2021 Parliamentary Elections and became Member of the Parliament, a position which is incompatible with his status as the Director of the Centre. Dr Ghazinyan presented all achievements and challenges that the Centre faced starting from 2007; he thanked the staff for the joint work and collaboration. He stressed that he resigned from the position as a Director but he would continue his academic and research activities.

The Council was suggested to consider Dr Vladimir Martirosyan’s candidate for the position of a
director. Dr Martirosyan was a Deputy Director of the centre since 2008. The council was presented with all his credentials and achievements. In the result of closed voting  Dr Martirosyan was unanimously elected as the Director for European Studies.