On November 29, 2016 the Centre for European Studies of the Yerevan State University presented its new interdisciplinary research on “Comparative Analysis of the Index of Democracy Level in the Context of Human Rights and Democratization: Armenia, Georgia, Azerbaijan, Russia, Belarus, Kazakhstan, Kyrgyzstan, Ukraine and Moldova” to a wider public, experts, embassies and media.

“COMPARATIVE ANALYSIS OF THE INDEX OF DEMOCRACY LEVEL” 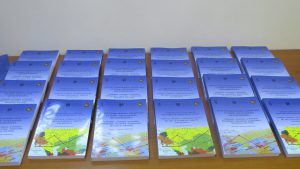 On Thursday, 29th October 2015, the presentation of interdisciplinary research on “Comparative Analysis of the Index of Democracy Level: Armenia, Georgia, Azerbaijan, Russia, Belarus, Kazakhstan, Ukraine and Moldova” took place in Robert Schuman hall of the Centre for European Studies of the Yerevan State University. 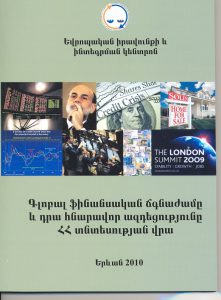 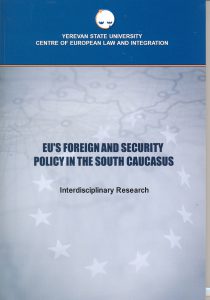 This interdisciplinary study is dedicated to the South Caucasus policy in the context of EU security strategy, main factors affecting it and perspectives. The research is aimed at state and non-governmental organizations, officials and civil servants, academicians, as well as experts and research organizations dealing with the relations of the EU and the countries of the South Caucasus. 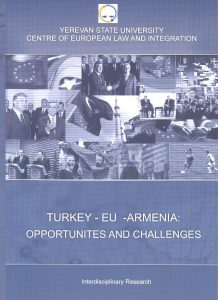 This interdisciplinary study is dedicated to the investigation of problems related to Turkey’s possible  accession to the EU, as well as the opportunities and challenges for Armenia in this context.  The research is aimed at state and non-governmental organizations, public figures and civil servants, academic circles, as well as experts and research organizations dealing with Armenia-EU, Turkey-EU and Armenia-Turkey issues.

“ATTITUDE OF YEREVAN CITIZENS TOWARDS THE PROCESS OF EUROPEAN INTEGRATION”, Analysis of the sociological survey results

The Center for European Studies has been granted the status of “EU information center” by the Delegation of the European Commission to Armenia, aiming at increasing the Armenian public awareness on current co-operation with RA and European integration structures, and implementing the dissemination of information on these processes. To further this objective the Center has elaborated “Information Dissemination Strategy Aimed at Increasing Public Awareness about the European Union”. For the implementation of the strategy and preparation of the action plan it was necessary to reveal the thoughts of the Armenian public on the processes of the European integration. For this purpose, in November 2008, the Center for  European Studies (former Center for European Law and Integration) in co-operation with “Demos” NGO (which conducts sociological surveys in Armenia)  surveyed citizens of the capital. 603 people (18 years and older) participated in the sociological survey carried out by the method of standardized interview. The results of the survey were analyzed and published in April of 2009.

Comparative study of Armenian and European educational systems titled “INTEGRATION OF EUROPEAN HIGHER EDUCATION SYSTEM AND PARTICIPATION OF ARMENIA IN THIS PROCESS”
Education and especially higher education and lifelong learning have become an important market product worldwide. The main aim of this research is to analyze and find out the main differences between the European and Armenian higher education systems, including level of centralization, role of state bodies, quality issues, etc. The integration processes in Europe, namely the Bologna process is analyzed as well.  Research is supplemented by the survey among students regarding their perception of reforms in higher education, Bologna process and role of state bodies.

Regulatory impact assessment
The research on  Regulatory impact assessment (RIA) issues is another area of interest for the Centre’s legal team. Interest towards RIA was raised yet at the stage of consultations with AEPLAC, which prepared a methodology of legal approximation and its considerable part was dedicated to RIA. As a result two particular outcomes were achieved, which were submitted to the attention of various stakeholders.

These two documents were presented to the Legal department of Government of RA, Ministry of Justice of RA and National Assembly of RA.
Throughout  the development of RIA, the Centre continued its consultations with all these bodies to involve also their point of view. The organization of a round-table on this matter is on the agenda, but is subject to financial and time-constraints since high-level participants should be involved.